As I get more and more questions about the Dutch housing market (particularly from abroad) it seems a nice idea to write a post about it.
We all know the problems of the American housing market but what do we know about the Dutch?
I can hear you think, what's the significance of the Dutch market worldwide? Marginal indeed, but what I will try to make clear is that the significance to the Dutch economy as a whole is far greater than thought of at first sight.
We're going to look at the way this market has been organised and financed in the past and what probable changes are going to take place in the future.

With the knowledge that almost all houses in the Netherlands are bought with the use of a mortgage let's have a closer look on how this works.
Before the crisis of 2008 it was very common, for people living together, to get a mortgage based on two incomes. With a modest income in the Netherlands at € 32.500 this would make € 65.000.
With this € 65.000 it was possible to borrow up to 6 or more times the annual income. This has never been an official rule. The rules implemented a certain percentage of housing costs a month, but in the end it turned out to be even more than 6 times.
Maybe it is unnecessary to say that when there was a change in the income negatively the problems immediately occurred. The problems though were not as big as they are today, because most houses were sold for a price higher than the mortgage.
Nowadays it's organised a bit different. Today the highest income is used in combination with an ever decreasing part of the second one. This does mostly result in a mortgage of 4,5 times the annual income. 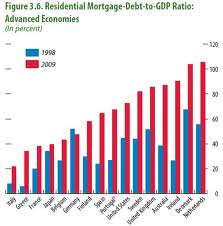 Besides this, there was also the possibility to borrow more than the price paid for a house. In fact this went up to 125%. When a house was bought for € 200.000 it was possible to get a mortgage of € 250.000.
No, I'm not kidding you here, this was normal in these days.
This "bonus" was spent on all kind of luxury things, like a totally new kitchen, bathroom but also cars and so on.
Later, it was only possible to spend this renovation bonus on the house itself.
This also implied that it was possible to buy a house without a single penny saved. Stepped up to the bank, showed your income and the "dream" was yours a nice renovation fee included.
Of course this couldn't go on forever and nowadays the 125% rule is heavily discussed.
Recently, mortgage products were launched with the possibility to borrow up to only 90% of the price of the house. A small step, as we look to our neighbouring country Germany, where it's common to borrow up to 80% and save the other part by yourself.
That this policy has led to the fact that the Netherlands has the highest mortgage-debt-to-GDP ratio can't be a surprise to you.

If this isn't enough already, the Netherlands also has a very loose fiscal policy on the interest paid over the mortgage.
It's pretty simple.
The percentage you pay as an income tax, is also your discount on your mortgage interest paid. If you pay 33% tax on your income, you get 33% of the interest paid returned by our loving government. This can increase to a level of 52%.
This policy is encouraging home owners to borrow as much as possible. Even when you're capable to pay cash for the house this law makes it financially more attractive to just borrow all the money needed.
But, with the ever increasing house prices this policy is costing the government more and more.
The Netherlands is running a budget deficit now of 4,5% of the GDP.
It's necessary to cut down expenses.
Europe has a maximum deficit prescribed of 3%. Probably the fiscal policy is going to crash in the following years, as it isn't affordable any longer.

The effect of all these measurements can be guessed. With almost everybody able to buy a house, the prices kept rising for years and years. The affordability however wasn't rising along. Wages are (corrected by official inflation numbers) somewhat the same.
This is leading to a bigger gap between the affordability and the real house price.
We can see the rising house price starting in the 80's, not coincidently along with the start of the encouragement measures of the government. 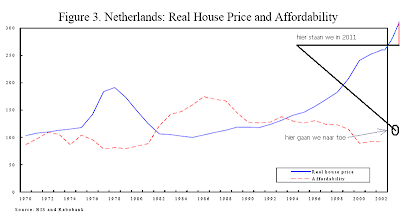 Why did the government take all these measurements? Officially it is to encourage people to buy their own home.
Personally I think this can be a reason, but I have some doubts whether this is THE reason.
More interesting is to see what  the consequences are for the Dutch economy?
The rising house prices were leading to a more and more debt driven consumption. People were able to get an additional mortgage to renovate their house. With this extra consumption the economy went in overdrive around the year 2000.
The CPB has done research on this, and this showed that the growth of the consumption between 2000 and 2009 was completely due to the price increase of the houses. Link (download pdf page 23) 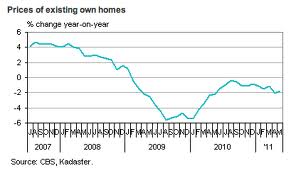 It's hard to call it coincidence that with the falling house prices the economy went into a recession.
With the budgetary problems of the government some measurements like the fiscal policy will tighten for sure.
The banks need more liquidity due to the Basel III regulation. With this in mind they won't be that eager to borrow people money without savings in return.
We can already see this in the new mortgage products.

The probability of a big crash in the house prices is very high. With just 10% down from the 2008 top we really haven't seen nothing yet.
In a market where it's product is priced by almost "free money" it's hard to say what the real value is. We will find out the hard way, as the price of money will rise.
I'm not even talking here about unemployment and other income related problems.
This dropping price may seem bad news for home owners, it isn't that bad for newcomers. Newcomers who can't afford a house now, will be able to buy a house in the future, taking on less debt.
We will eventually return to a situation where a house will become a bunch of stones again to live in, and not an investment option to make a lot of money.

Maybe interesting to show how much an average house in Holland costed in gold. A 100 years ago, 50 years, now?

For example, 100 years ago gold was still part of our monetary system. Houses were to live in, and not in a bubble like we have today. The outcome of this comparison would give us a number, right?

When we look at today, we can agree that the housing market is/was in a gigantic bubble due to the "free money" going trough it. Gold isn't in our monetary system any more (officially, we know better), and treated as a commodity. The outcome of this comparison would give us also a number.

To compare this number with the number of 100 years ago isn't saying us to much due to the significant changes. Agree?

Everything is watched from the currency angle, which we both learned to let go. Try to look from the "value" angle is the key thing here also.

Hi Boelfke,
nice new topic. Looks like your dutch compatriots love ponzi schemes, just as most IMF countries;)
Anyway, a much more interesting question from my side would be: How expensive is farmland in the netherlands?
Besides gold I am really into diversiving into that (you cant run fractional reserve banking on land;). Bought some in Germany, but now it is not affortable any longer (>>12000€/h), besides that: the statists always tend to steal from real estate owners....
Greets, AD

Thank you for your positive reply.

As my savings aren't big enough to look at positions next to gold I'm not interested in the subject of farmland yet. And actually I don't know what's the price in the Netherlands.

Without any research I think the price would differ between the heavily crowded West, and the less crowded North. Like I said, I haven't the slightest idea.

I'm going to get you an answer though, because it could be a future option if gold's going higher and "freegold" would still be on the roll. Got a friend in this business, so will come back on this alter.